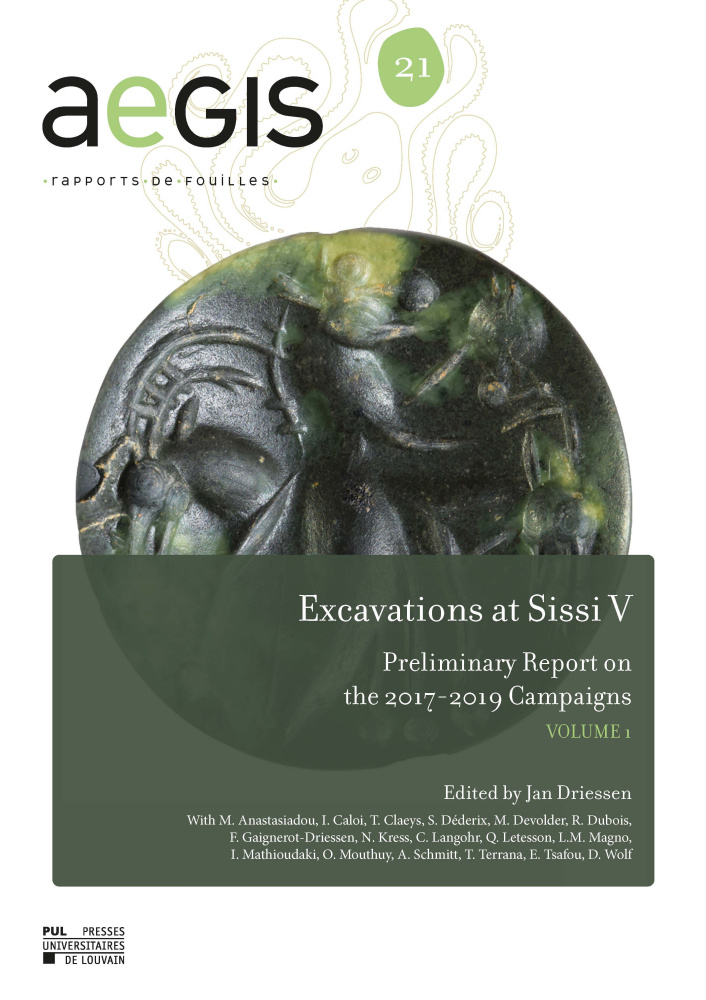 This volume
This volume, in two parts, is the fifth and last preliminary report on the excavations conducted at the Bronze Age site of Kephali tou Agiou Antoniou at Sissi in the nomos of Lasithi, Crete. It covers the campaigns during the summers of 2017, 2018 and 2019 with quite detailed reports on the different areas excavated, including the cemetery, the residential structures and the Court-Centred Building. We also report on the tests conducted and the three survey campaigns in the east part of the Sissi basin, with additional attention to the ammouda quarry and WW II remains. The volume also includes a series of scientific analyses that have been made on some of the material (ceramics, seals, gold, plaster, coins) and a brief presentation of the consolidation efforts that have been done on the remains discovered thus far. Since the study of the architecture, stratigraphy and finds is still on-going, all results should be considered as provisional. The final excavation reports that are in progress may modify some of the opinions expressed in this volume or the previous ones.

The authors
The excavations are carried out under the direction of Prof. Jan Driessen of the UCLouvain (INCAL-CEMAAEGIS)
with which several of the collaborating authors are affiliated or associated (Dr. C. Langohr, Dr. Q. Letesson, Dr. M. Devolder, Dr. S. Déderix, Dr. F. Gaignerot-Driessen, Dr. O. Mouthuy, Dr. I. Mathioudaki, T. Claeys, N. Kress, L.M. Magno, D. Wolf, E. Tsafou, R. Dubois, T. Terrana). Dr. A. Schmitt is at the CNRS (U. of Marseille), with which also A. Delliste, C. Girardi and E. Sperandio are associated. Dr. M. Anastasiadou is at the University of Vienna and Dr. I. Caloi at the University of Ca'Foscari in Venice. Dr. Sarris was at Forth in Rethymnon (with M. Manataki) but is now at the University of Cyprus; Dr. B. Legarra Herrero, E. Hayter & colleagues are at University College London, Dr. P. Iossif is deputy-director of the EBSA, while T. Sager is at the University of Toronto.