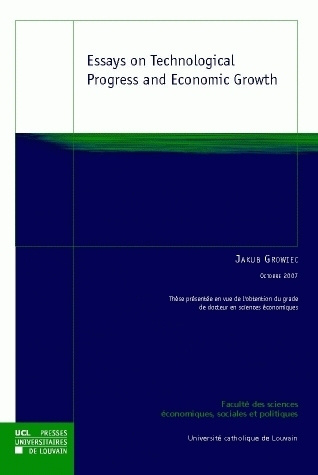 This thesis covers a broad range of topics in the general area of economic growth theory and economics of technological change. It is primarily about the ultimate sources of growth and its ultimate limitations. We scrutinize the implications of several specifications of long-run growth “engines” found in the theoretical literature and put forward their generalizations and extensions.

At the highest level of generality, we provide a formal proof that balanced (i.e. exponential) growth requires knife-edge assumptions which cannot be satisfied by typical values of model parameters. This result implies that at least one such knife-edge assumption must be made if a given model is supposed to deliver balanced growth over the long run. Next, we deal with the issue of resource-based limits to long-run growth. We propose to promote technological progress which would improve the substitutability between non-renewable and renewable resources: if the elasticity of substitution between the two kinds of resources exceeds unity, production will not fall down to zero even after the non-renewable resources will have been completely depleted. Another question asked is whether it is plausible that R&D-based growth, fueled by steady increases in the world’s population, can be extended into indefinite time. We answer this question by introducing endogenous fertility choice, with population entering the utility functional multiplicatively, into an R&D-based semi-endogenous growth model. The next issue addressed here are the idea-based microfoundations of aggregate production functions. We discuss the correspondence between the shape of production functions, the direction of technical change, and the possibility of sustained endogenous growth. A broad class of production functions, nesting both the Cobb-Douglas and the CES function, is derived. Finally, we discuss the impact of the heterogeneity of innovations on long-run economic dynamics: we augment the semi-endogenous growth model with a distinction between radical and incremental innovations. Total R&D output is assumed to depend on technological opportunity which is depleted by incremental innovations but renewed by radical innovations. The dynamic interplay of the arrivals of the two types of innovations is shown to give rise to transitional oscillations.