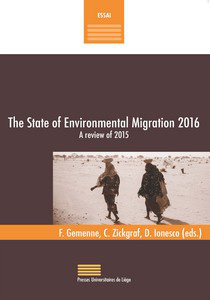 The State of Environmental Migration 2016

The State of Environmental Migration 2016: Review of the Year 2015 is the sixth annual volume of the series, which selects and compiles Masters students' work from the course "Environment and Migration" at the Paris School of International Affairs (PSIA) of Sciences Po in an ongoing partnership with the International Organization for Migration (IOM). Each year, students detail and analyze the year’s environmental events insofar as they have affected various forms of migration. This volume includes several important illustrations: landslides in Colombia, floods in India, an earthquake in Pakistan.

Overall, 2015 has been a key year with regard to policy developments relating to environmental migration issues. First, the Nansen Initiative, an intergovernmental process launched in 2012 by the governments of Norway and Switzerland, concluded in October with the adoption by 109 States of a Protection Agenda that outlines the rights of those displaced across borders by disasters. Secondly, the adoption of the Paris Agreement at the COP21 in December of 2015 was the key policy event of the year. The first universal agreement on climate change is mostly focused on greenhouse gas emissions reductions, but also addresses migration and displacement, as it created a task force to advise the UNFCCC bodies on these issues. The task force is expected to serve as a hub for the integration of research and policy on climate change and migration in the UNFCCC negotiations, and should be established as part of the Warsaw International Mechanism on Loss & Damage. This new edition of The State of Environmental Migration will hopefully serve as a reminder of the magnitude and importance of the challenges to come.