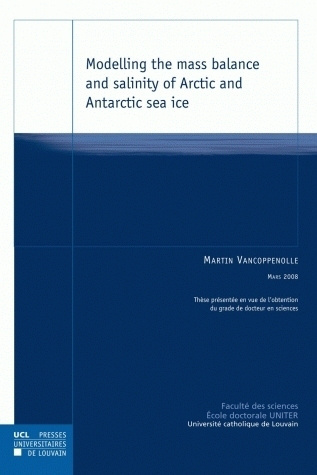 Ice formed from seawater, called sea ice, is both an important actor in and a sensitive indicator of climate change. Covering 7% of the World Ocean, sea ice damps the atmosphere-ocean exchanges of heat, radiation and momentum in polar regions. It also affects the oceanic circulation at a global scale. Recent satellite and submarine observations systems indicate a sharp decrease in the extent and volume of Arctic sea ice over the last 30 years. In addition, climate models project drastic sea ice reductions for the next century, in both hemispheres, with potentially large consequences on climate and ecosystems.

Contrary to what is commonly believed, sea ice retains about 25% of the oceanic salt when it forms. As salt cannot lock in the ice crystalline lattice, it accumulates in liquid inclusions of salty water (brine). Under a temperature change, the inclusions freeze or melt and release or absorb huge amounts of latent heat. This affects heat transfer through and storage in sea ice, which may affect the mass balance of sea ice at a global scale. This is the central hypothesis of this work.

In order to address this problem, the author develops two sea ice models and assesses their ability to simulate the recent evolution of the sea ice mass balance. Then, the physics of brine uptake and drainage are included in the models and sea ice desalination is investigated. Finally, the impact of sea ice salinity variations on the global sea ice mass balance is studied. The roles of sea ice thermal properties, of ice-ocean salt / fresh water fluxes and of oceanic feedbacks are evaluated. The new salinity module improves the simulation of ice and ocean characteristics compared to observations. Including salinity variations increases ice growth, reduces vertical mixing in the ocean and the ocean-to-ice heat flux. In conclusion, salinity variations should be included in future sea ice models used for climate projections.

Development of an AOTF-based hyperspectral imager for atmospheric remote sensing

Spatial analysis of bicycle use and accident risks for cyclists