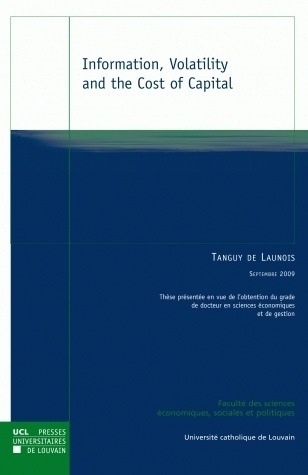 Information, Volatility and the Cost of Capital

We all have in mind a couple of dramatic examples of how information releasedby some economical or political entity resulted in tremendous consequencesfor a private company or, worst, for the whole financial market. This is thepurpose of... Read More

We all have in mind a couple of dramatic examples of how information released by some economical or political entity resulted in tremendous consequences for a private company or, worst, for the whole financial market. This is the purpose of this dissertation to investigate the relations between information,stock volatility and the cost of capital.

After the extension of the standard CAPM model to a more realistic world where some investors are “constrained” and deviate from their optimal CAPM quantities, we confront our theoretical model to the empirical reality by investigating the so-called “index effect”. Thanks to econometric specifications robust to endogeneity, we test different hypotheses proposed by the literature to explain this well known value premium of firms belonging to large indices.

In a next step, we investigate how the quality and quantity of micro and macro public signals impact the main determinants of our pricing equation initially developed. We show that in a world of constrained investors, firms benefiting from a high deviation have less incentive to communicate than others.

Finally, we study the link between public information and conditional volatility thanks to an original sample of several tens of thousands of Reuters and Dow Jones news releases on both the French and US markets.

Thanks to various econometric specifications like GARCH models and Markov Switching Regressions, we conclude that a larger daily number of news releases increases the probability to be in the high probability regime and that the impact ofinformation is strongly dependent on the topic and the timing of the release of this information.