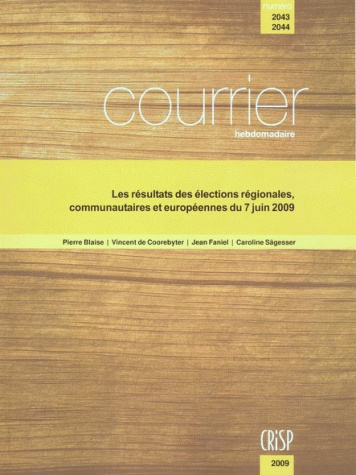 In Belgium, the election of June 7, 2009 election was a complex, multiple effects. Voters were asked to renew a direct five parliaments: the Belgian Representation to the European Parliament, the Flemish Parliament, Walloon Parliament, Parliament of the Brussels-Capital and the Parliament of speaking Community. Five other meetings were renewed, in whole or in part, indirectly, with the Parliament of the French Community.
This issue of the Weekly Mail first examines changes in the political balance of power after the elections. Then, for each parliament, we analyze the voting behavior, including absenteeism and invalid votes, the results across all divisions or across colleges, the results by constituency and by township, the new composition of the assembly, the formation of the coalition government and the powers of government members.
Analysis of changes takes essentially as a point of comparison, the previous elections of the same nature, that is to say the regional elections, and European Community in 2004 and 1999. A brief comparison of the results of 2009 is nevertheless made for the main lists, with their results at the 2007 federal parliamentary elections.